History of the Vulpes Fox Project

History of the Vulpes Fox Project

The Vulpes Fox Project was started in 2021 by a Lady named Lois Schwarz of White City Oregon after 30+ years producing the Dire Wolf Project.

The goal: To create a companion dog that resembles a fox. Why? Because hundreds of folks want such a dog and because Lois can. For more information, email schwarzkennels@aol.com.

Lois takes pure bred dogs and mixes them together in breeding’s to get a foundation (starting) line of dogs that will continue to rebreed consistently. First Lois sets up the 'temperament, conformation and looks' on paper. This is then called the Standards of the Breed. Next, she breeds to obtain the goals.

"Starting a NEW BREED of dogs, or any animal, takes a long time. It is a PROJECT that takes perseverance and dedication as well as knowledge. For our many clients, this means 'WAITING' which is so very hard to do."

Please know that you might be confused at the breeding of particular dogs as you have not been breeding animals for over 50 years. It may sound like a simple thing to do and that anyone could do such a thing, and many have tried and have created new breeds of dogs, but the difference is that Lois knows what she is doing. So, if you are curious, hold on to your hats and sit back and watch what happens.

First, we Study the Fox 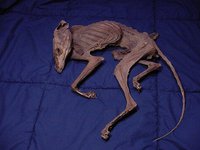 The genus Vulpes is made up of 12 extant species referred to as the “true foxes.”

There are 6 species known from fossils. 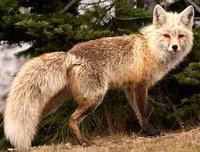 Foxes are part of the Family Canidae which also includes wolves, coyotes, and dogs.

Foxes are distinguished by their small size, flattened skulls with pointed snouts, and a large bushy tail.

Adult foxes can be killed by coyotes, bears, and wolves. 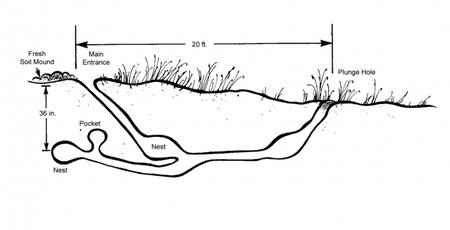 The young KIT'S face a broader range of threats from large birds of prey such as eagles, which is why they must remain in the den and out of sight for weeks. 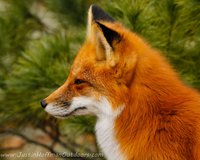 Red foxes are found from North America, Europe, and India to Japan.

Foxes are not found in tropical regions. 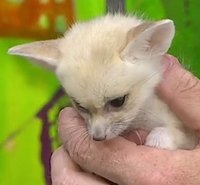 Foxes are found from the desert (fennec fox)

Fennec fox: has a very thin coat and large ears.

They say foxes are solitary animals.

Foxes have been seen in groups of around ten.

Fox species tend to breed from January to late March. Gestation is 63 days same as a dog. (Once a year).

and North to the Arctic (Arctic fox). 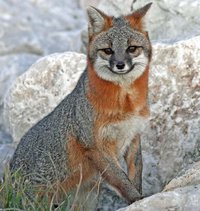 And from high elevations in the mountains to the open plains 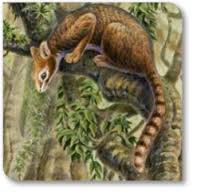 All Carnivore evolved from an animal called a miacid 'Miacidae', which was a small tree-living mammal.

During the mid-Eocene times carnivores split into two suborders that we know today as Caniformia, the dogs, and Feliformia, the cats. (Feliformia have a double chambered auditory bulla).

The Caniformia have an auditory bulla that is single-chambered (bears, weasels, raccoons, seals, etc) or partially divided (dogs). 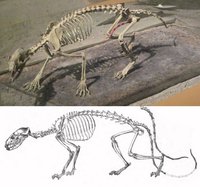 In North America, Hesperocyon appears. It is the first canid genus and the basis of the hesperocyonine radiation, the first of three radiations of canids. These canids are small kit fox-sized animals with supple, muscular bodies, long tails, padded feet, and relatively short muzzles. They walk on their toes (digitigrade) like modern canids and are good climbers. They have carnassials adapted for shearing and ossified auditory bullae.

In the Late Miocene, the third canid radiation begins.... This is the canine radiation based on the small fox LEPTOCYON.

The decline of the Borophaginae possibly opens the way for this radiation which begins in North America with the appearance of three genera:

Vulpes is made up of 12 species, but there are about 27 extant species of foxes spread over 9 different genera'

They were small and weighed around 2 kilograms (4.4 lb).

They first appeared in North America around 34 million years ago in the Oligocene at the same time as the Borophaginae with whom they share features, indicating that these were two sister groups.

The species L. delicatus is the smallest canid to have existed.

At the close of their genus 9 million years ago one Leptocyon lineage resembled the modern Fox.

Leptocyon were small-bodied, fox-like animals with a long, narrow jaw and delicate teeth. They were probably omnivorous, feeding on small animals and fruit in a diet that remained relatively unchanged during the Miocene. 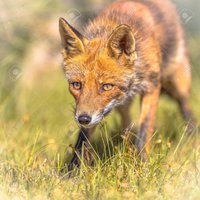 Foxes have a dog-like appearance, but on average are quite a bit smaller in size compared to most other canids. They have shorter legs with a slender body, a distinct flattened skull with a pointed snout known as a “fox face” and varying sizes of upright pointed ears. Like all canids, foxes have a muscular frame, strong jaws, and teeth for grasping prey. Blunt claws are primarily useful for gripping the ground when chasing down their meal. Contributing to the foxes’ lengthy appearance is its long bushy tail.

Tail: makes up about one third of its body length and consists of a black tip at the end. The tail can also be used for the purpose of keeping warm by wrapping it around their bodies.

Size: from 39-43 inches in length (including tail) and weighing around 7-15 lbs. (Males are larger than females).

Underground dens are built and lined with grass and other leaf litter to create a soft warm enclosure for the litter. These dens are randomly spaced, occupied year after year, and are located in highly vegetated and covered areas. Litters are born in March and April after a gestation period lasting 7 to 8 weeks. Females have a litter annually ranging in size from 1 up to 11 pups, with most averaging 6.

Newborn fox cubs are blind, deaf, dark-grey in color and weigh about 120g.

After 14 days, their eyes open. Their pupils are slate-blue. Guard hairs appear, giving cubs a fuzzy appearance. They have small, floppy ears and weigh about 350g.

After four weeks, the cub’s pupils are grey flecked with brown. The muzzle starts to lengthen. White fur appears around the mouth and patches of red on the face.

The coat is still woolly, but the ears are now erect.

Throughout the summer, cubs are very similar to adults but have thinner coats and a lankier appearance. They become indistinguishable from the adults by late September or early October, once their winter coats are fully grown.

In late September, the family group breaks up and some or all of the cubs disperse.

Foxes are territorial animals, usually staying within a certain area. As population density of fox species increases there is an increase in social groups. These groups consist of one dominant pair and a few other subordinate adults that are related. Foxes primarily feed on rodents. The fox launches vertically into the air then falls on the prey killing them quickly. 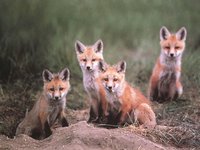 Foxes are vocal animals. Unlike other canids they do not vocalize as a group. They use several different vocalizations to stay in contact with relatives because each individual has its own unique voice. A single voice is capable of spanning over a range of five octaves. The most well-known fox call is similar to a kind of bark that usually lasts for three to five syllables and resembles, “Wow-wow-wow”. This vocalization is used at all distances, is high pitched.

Another sound created by foxes is a basic alarm bark that consists of only one syllable. It is very sharp when heard at long distances but is somewhat of a cough in close quarters. This is mainly used by parents to alarm pups of danger nearby.

There is also a vocalization known as gekkering, which is a stuttering noise that resonates from the throat. This sound is mainly heard during mating season or during any aggressive interactions.

Lastly there is the vixen’s wail or scream, a long, drawn-out, single note that is usually heard during breeding season. Thought originally to only be made by females in heat trying to call upon an available mate, it has also been observed being produced by males.

Foxes are generally smaller than some other members of the family Canine such as Wolves and Jackals while they may be larger than some within the family, such as Racoon dogs.

Fox features typically include a triangular face, pointed ears, an elongated body and a bushy tail. The Foxes walk on their toes and have partially retractable claws.

Fox whisker hairs are black. The whiskers on the muzzle, known as mystacial vibrissae, average 100–110 millimetres (3+7⁄8–4+3⁄8 inches) long, while the whiskers everywhere else on the head average to be shorter in length.

Whiskers are also on the forelimbs and average 40 mm (1+5⁄8 in) long, pointing downward and backward.

Other physical characteristics vary according to habitat and adaptive significance.